As a member of the Contemporary Group of The Quilters Guild I like to take part in the Journal Quilt Challenge every year. This year the quilts had to be 11x11ins, subject and technique of our choice. I chose to look at my Family Folklore this year. You know all those stories that are passed on from parent to child by word of mouth. 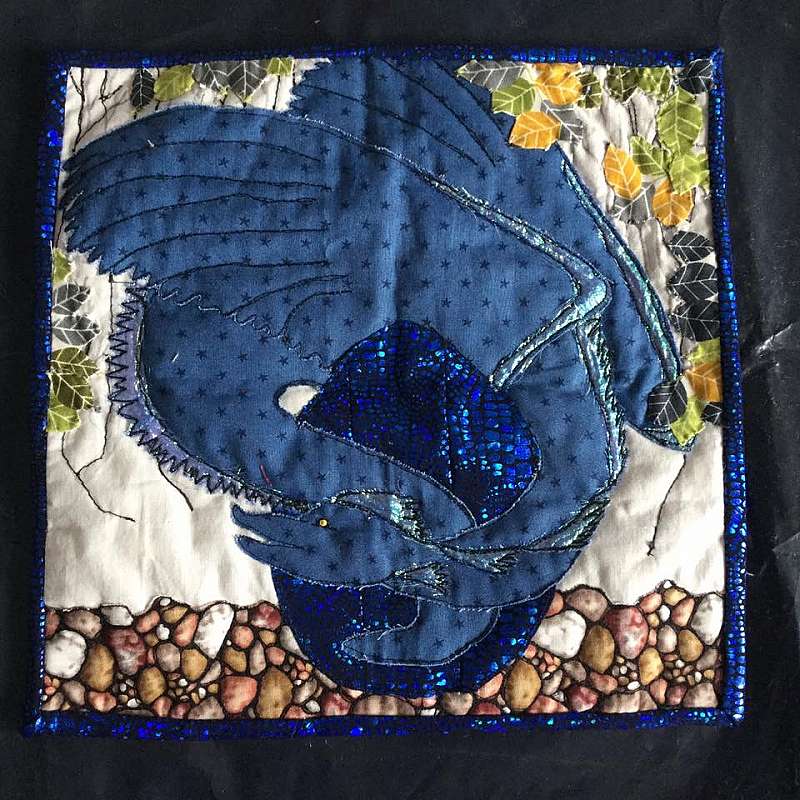 When my children were little we had a big blue ceramic egg in our garden. I called it my dragons egg. My nieces and nephews used to ask every time they visited, “when will the dragon hatch? “. I used to tell them it hasn’t been hot enough yet, Dragons Eggs need it to be really really hot to hatch. It never did hatch. 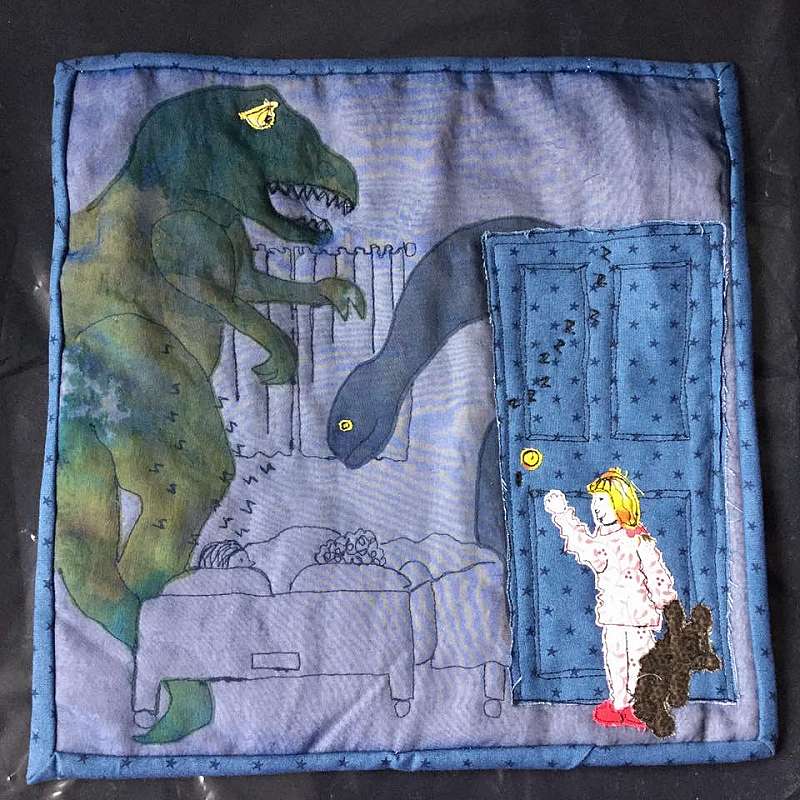 When I was a very small child, if I awoke during the night I would toddler along the hall to my parents room. On one occasion I remember getting to my parents door and hearing a loud roar. I thought it was dinosaurs. Terrified to go in i toddled back to my own bed and fell asleep. 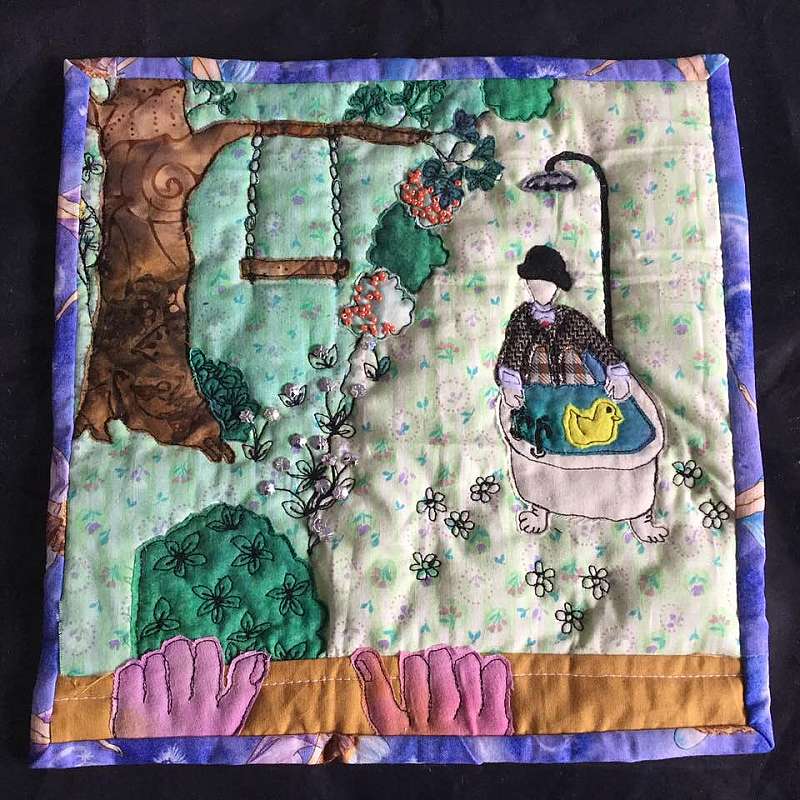 When my eldest daughter was small, we were in her room which overlooked our garden, we were looking out of the window talking about what we could see, she asked me what the man was doing in the garden. I asked her what man. She described him, I asked what he was doing as I could see no one. He’s having a bath she said in all seriousness. I continued chatting as I realised all children saw imaginary things at times. She did mention him again but he was very short lived! 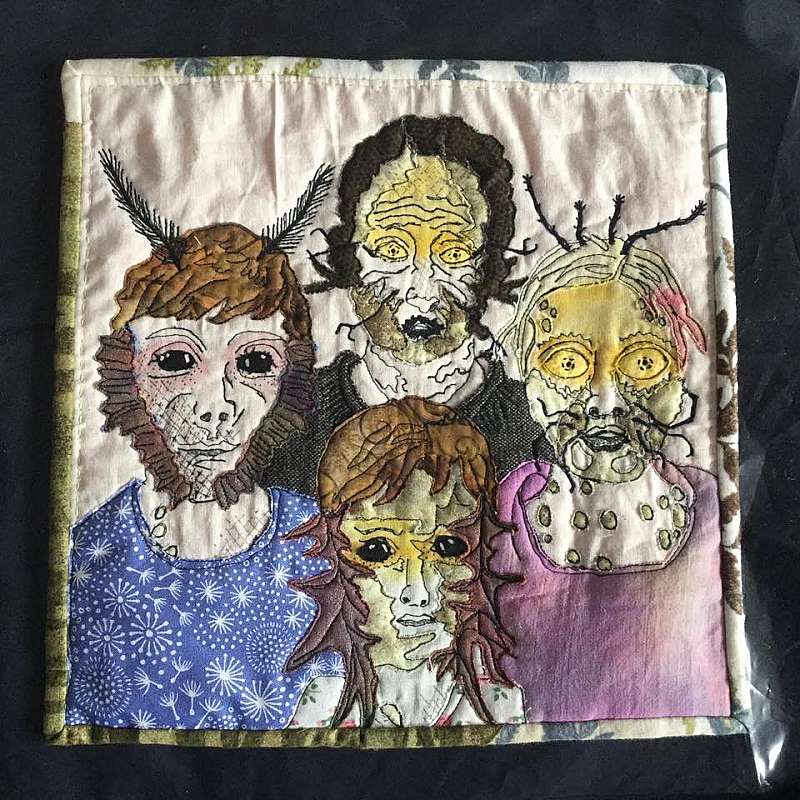 My son was at college studying Graphics. A project called Metamorphosis. What else to do but transform your family into insects! Not he didn’t include himself! 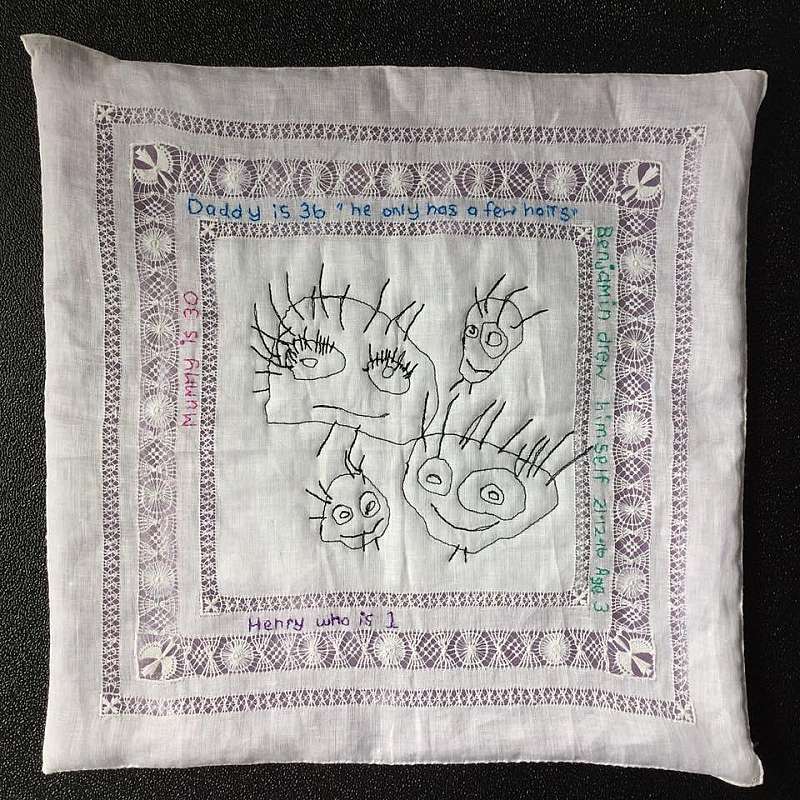 Right up to date. The newest generation, my eldest grandson, his first drawing of his family. 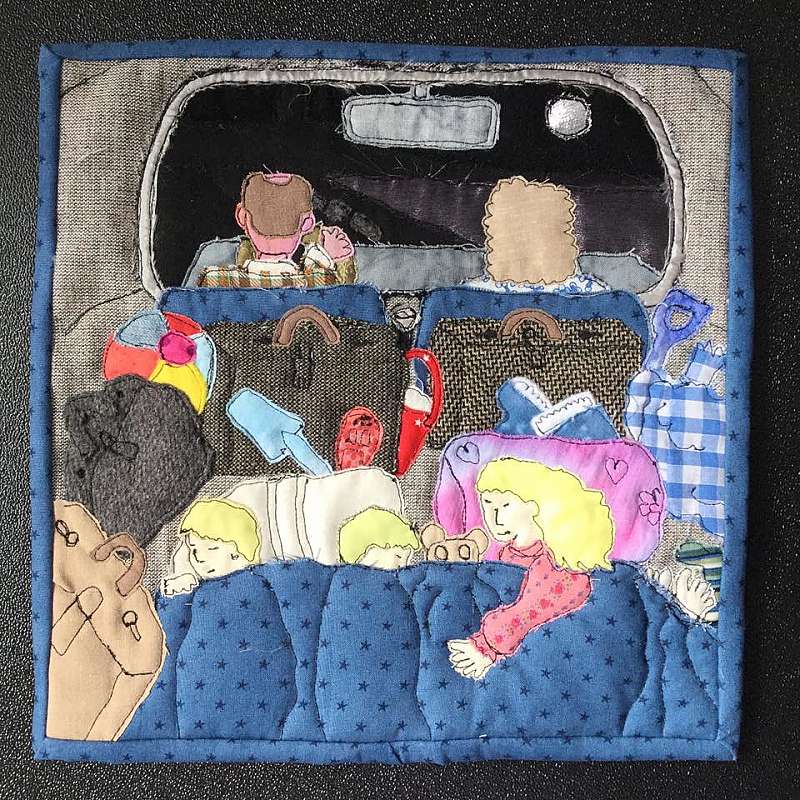 When I was a little girl, long before ‘ health and safety’, we had a small transit van. We lived in the Midlands while both sets of grandparents lived in North Yorkshire. The journey to our grandparents was a bit of a nightmare with 4 children. So we went to bed as normal the night before we went on holiday, we were lifted onto a mattress in the back of the van, top and tailed all 4 of us. Luggage packed around. To awake at the seaside at our grandparents house. Our magic carpet. 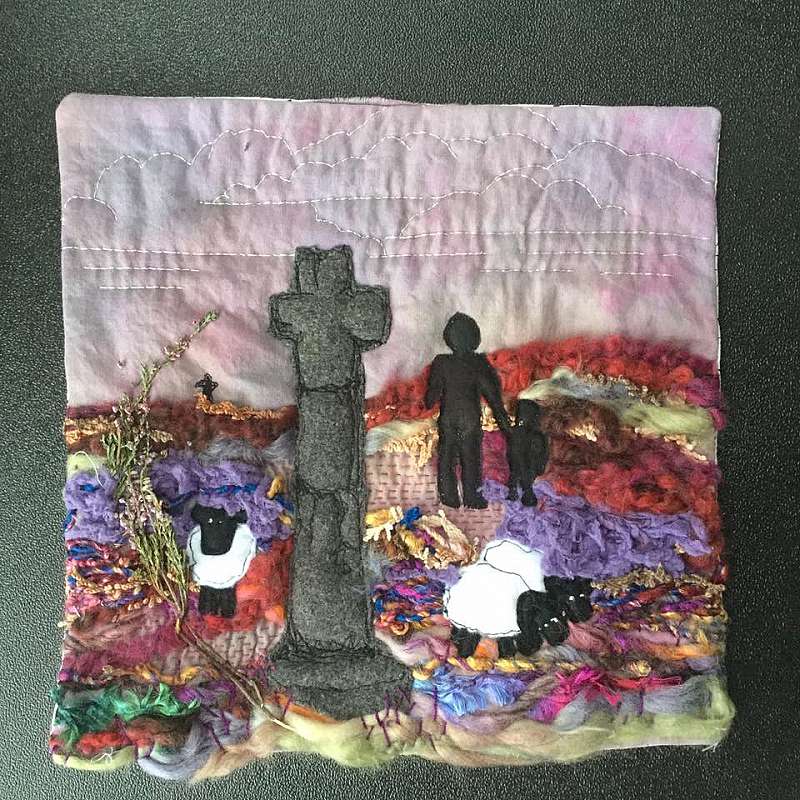 Up on the North York Moors stands a tall stone cross, Ralphs Cross, away into the Moor stands an older cross Old Ralph. My father was a Ralph as was his father before him. My grandfather always said they were named for them. Of course they were far older than both of them. But my dad carried on the tAle to us. 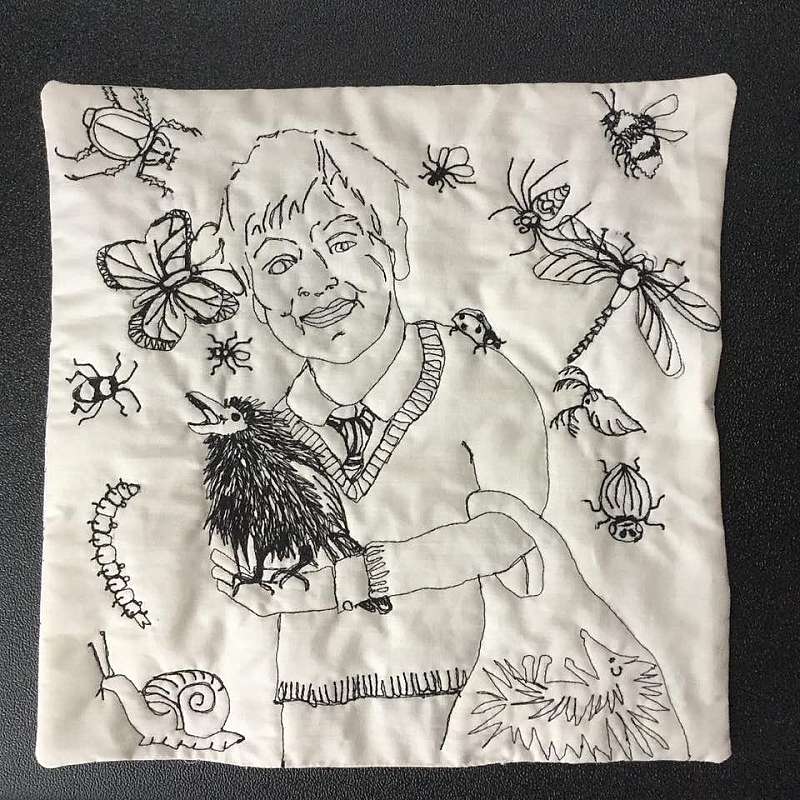 My son was very good at collecting animals as a young lad. He had a passion. One evening after school he brought home a fledgling crow, of course he thought it was lost. We took it back straight away in the hopes it’s parents were still looking. After tea at a friends, the friends mother rang to ask us what she should do with the hedgehog. What hedgehog I said imagining a toy hedgehog. The dead one he brought with him in a carrier bag! Apparently he found it by the playground at school and the caretaker found him a bag to bring it home! Needless to say I told her to throw it away! 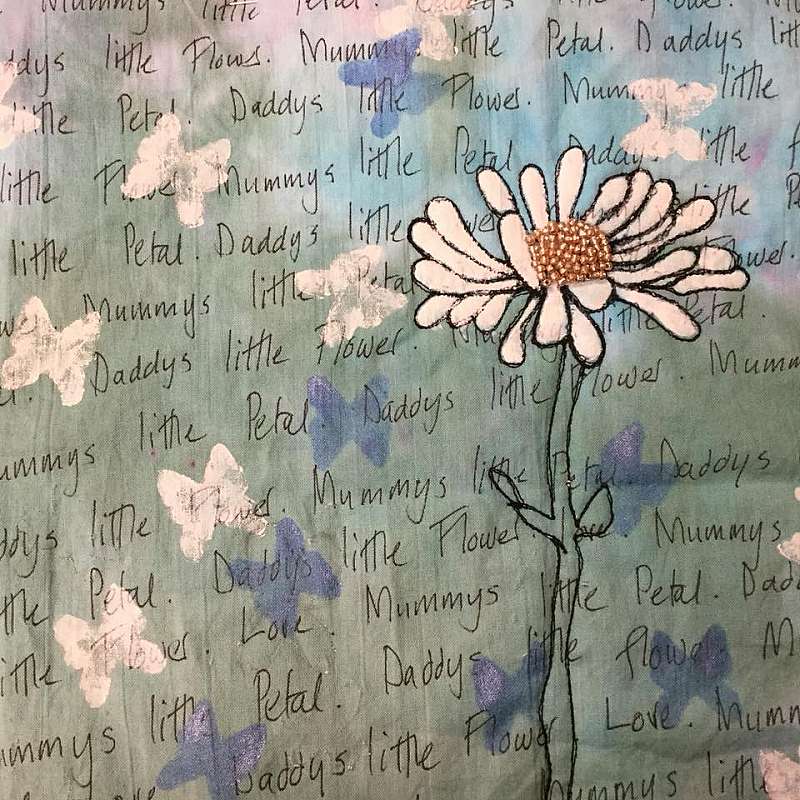 As a little girl my mum called me her little Petal and my dad called me his little flower. I once asked mum what sort of flower and she replied a daisy. 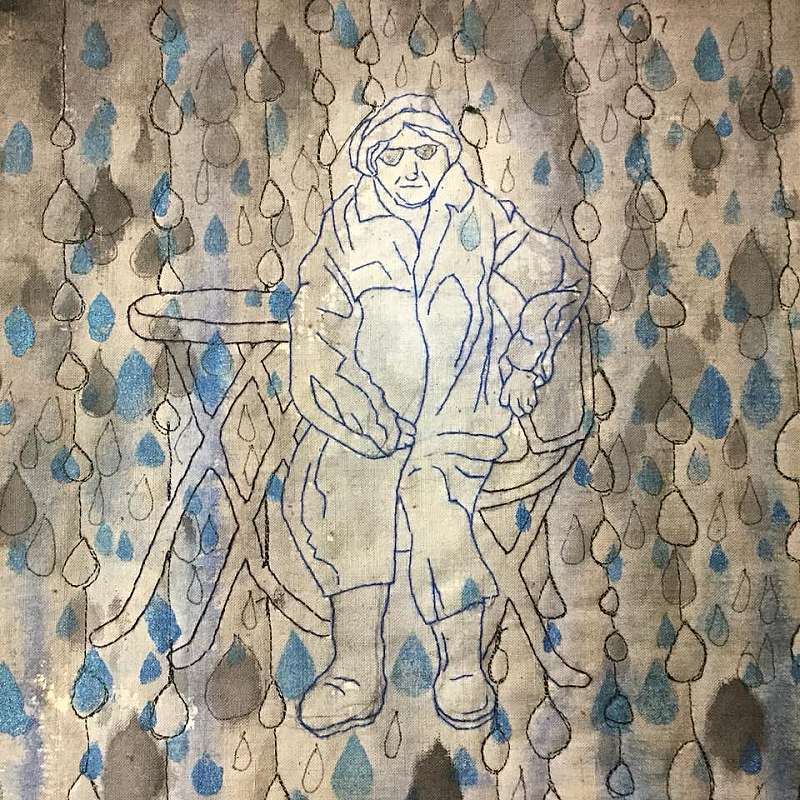 Taken from a photo of my Nanna. Sitting in front of their hotel on holiday, looking very wet and forlorn in a downpour. I have no idea why Grandad would want to take her photo like this. But an image I’ve always loved. 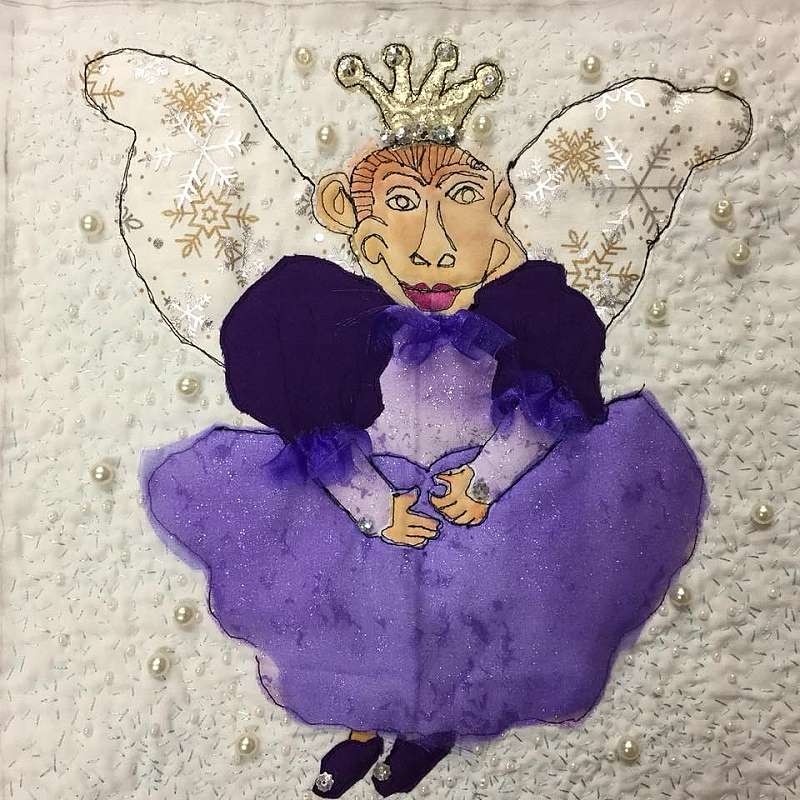 In 2001 I spent 5 months in the USA. I came home in December so brought with me a fairy for the top of our tree. Meet Monkey Fairy. As ugly as she is beautiful. Not all the family think so. One year she spent Christmas with paper bag over her head and another she was kidnapped, I threatened to cancel Christmas until she was reinstated! 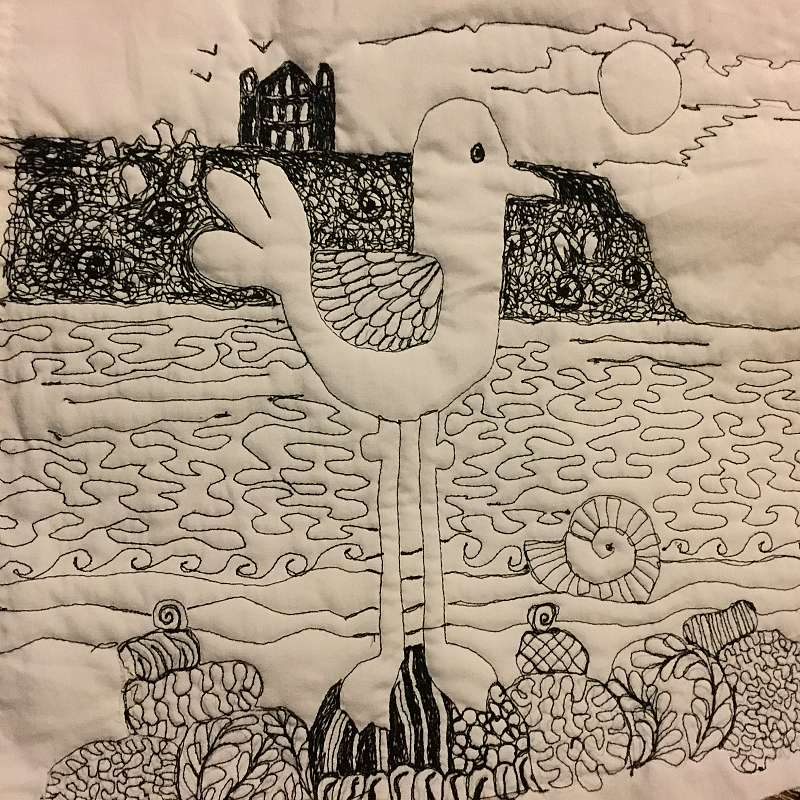 And finally, no collection of my family folklore would be complete without Gulliver. Gulliver came into my life shortly after we moved to Whitby. He is often in my work and is well know to friends and family.

A variety of fabrics and techniques have been used including, free-motion stitching, hand stitching, appliqué, paint, couching. Thanks for reading.